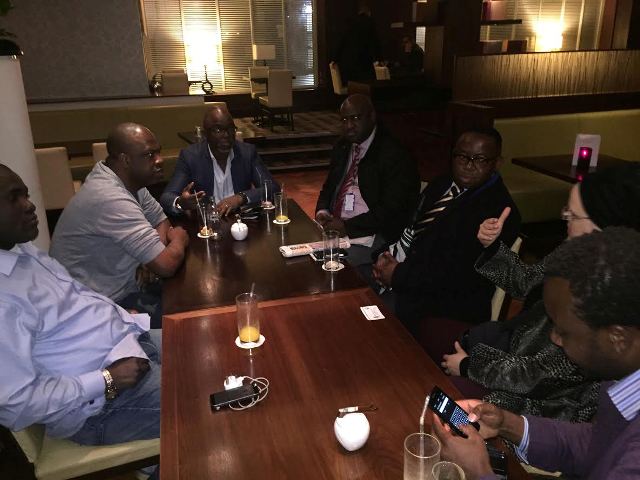 The President of the Nigeria Football Federation Amaju Melvin Pinnick held a meeting with parents of Nigerian footballers based in the UK, assuring them of their sons’ safety and progress should they choose to wear the colours of Nigeria.

There is a huge number of Nigerian footballers, many born and raised in the UK, but who have expressed a desire to open their hearts to the possibility of playing for the Super Eagles; and Pinnick was quick to appreciate that.

“Most of your sons have the option to wait for their chance and play for England, Wales or Scotland”, he said, “and the fact that you are steering them in the direction of playing for their country of origin is laudable and I really appreciate it”.

The NFF President stated that he would like to see youngsters who, in his words, “have been exposed to the scientific methods of football in terms of coaching style, amenities and equipment as well as discipline in areas of fitness and nutrition” to build a new-look Super Eagles team that would conquer the world.

He promised that players will be selected on merit, and that the days of favouritism are forgotten in the new administration led by him.

Pinnick, in the company of his newly appointed Special Envoy on International Affairs, Tunde Adelakun, called the attention of the parents to the choice made by Victor Moses who, despite having featured for England Under-21s, opted to play for Nigeria and was rewarded with being a part of the Super Eagles team that won the 2013 Africa Cup of Nations.

“That will remain in his books for the rest of his life - a winners medal at the AFCON, and I am sure he will not regret playing for Nigeria” he said.

He drew comparison against some of the players eligible to play for Nigeria but who opted for England, were capped only a couple of times and were dropped, and asked the parents to use this as example to their wards.

He was quick to extol, though, the goodness in the Nigerian league system, saying his move was not an act of disrespect to the home-grown talent that abound in the country.

“We all know that the Nigerian leagues produce many players and I know that. However, I also know that we have many talent in Diaspora and we want to tap into them all, so we can identify and select the very best across the board”. he explained.

The Delta-born administrator gave assurances that the parley will be a continuous process, and that the new Technical Study Group of the NFF led by former international Jay Jay Okocha will visit the players in the coming weeks and establish close links with them with a view to being selected for the national teams.